Google and the Trading Post are unusual targets for the ACCC, which issued this press release:

The ACCC is also alleging that Google, by causing the Kloster Ford and Charlestown Toyota links to be published on its website, engaged in misleading and deceptive conduct in breach of section 52 of the Act.

Further, the ACCC is alleging that Google, by failing to adequately distinguish sponsored links from “organic” search results, has engaged and continues to engage in misleading and deceptive conduct in breach of section 52 of the Act. More…

“Google Australia believes that these claims are without merit and we will defend against them vigorously. They represent an attack on all search engines and the Australian businesses, large and small, who use them to connect with customers throughout the world.”

“The internet industry has always had a positive relationship with the ACCC. It’s very unfortunate that the ACCC has decided to pursue a litigious strategy against one participant, rather than consulting more broadly on an issue that affects the entire industry.”

The ACCC statement suggests that the Title of the ads read “Kloster Ford” and “Charlestown Toyota” but the Destination URL (which is hidden from view) took the clicker to the Trading Post. I agree that I would be pissed off if my competitor used my brand name in their ad title, but I have to shake my head that the ACCC has been brought into this matter.

Today, a search for “Kloster Ford” in Australia (use &gl=au if you are overseas) brings up an ad for some company, but the Title text and ad copy do not mention Kloster Ford:

It is likely that this advertiser used “Kloster Ford” as an Exact Match keyphrase, since the ad does not show for just “Kloster” or “Ford”, or “Kloster Ford is beaut”. Similarly, a search for “Charlestown Toyota” brings up some other company’s ad, but it appears to be triggered by the word “Toyota” so no big deal there. (Incidentally, search for just “Ford” and see whose ads come up!)

This type of activity happens a lot in PPC search engines – until the advertiser complains.

which says, in part:

I can confirm from experience that a trademark owner can ask Google to disallow anyone else from using their marks either as Keywords or in ad copy (outside USA and Canada) or just in the ad copy (in USA or Canada). I have done this on behalf of clients, as would any other competent Google Advertising Professional, even before a breach occurs. Standard procedure.
I don’t remember what the rules were in 2005; no doubt, they will be explored deeply in court. Perhaps, Google will build a massive database of every trademark on the planet and their owners, so that misleading and deceptive ads can never see the light of day! 😆

As for “failing to adequately distinguish sponsored links from ‘organic’ search results” – even in 2005, it was easy for anyone with a working eyeball to tell one from another. Here is a comparison between 2003 (left) and 2007 (right): 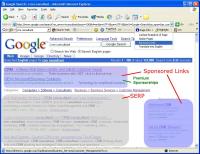 In 2003, the ads were quite some distance from the organic results (picture from my article in APC magazine). There are plenty of screen shots from 2005 on the web that are clearer than my image and which show a similar separation between the organic and PPC results.

Anyway, the SEO in me is asking, “who said that Google needs to place ads in any particular place, font, or colour?” As a user of the Web, I don’t remember signing any agreement with any search engine that protects me from clicking an ad.

If the ACCC really wants to see ads that are cleverly placed alongside non-ads so that it is hard to spot the ads, they should visit some Made-for-Adsense sites. I noticed that ZDNet.com.au also has “Sponsored Links” at the bottom of the page. Oh my, it is the same font and colour as the block next to it. Will it be next on the ACCC’s radar?

Feel free to share...FacebookTwitterRedditStumbleUponLinkedinemailBrad Geddes has published an excellent post entitled “Exact match is no longer exact match – are you managing the changes correctly?” Although it is about PPC, can SEOs learn from it? It is a timely reminder for those of us in SEO and content writing to be aware of Search Intent versus Keyword […]