Google PlaceRank in the wild

Google has sent QR Code stickers to about 190,000 businesses across the US that have been tagged as a Favorite Place (they have a mobile version of their website). Favorite Places are the mobile equivalent of Place Pages (aka Google Places).

TechCrunch has quoted Google Earth VP John Hanke, “Google will be adding these businesses incrementally. ‘They are selected based on their PlaceRank,’ says 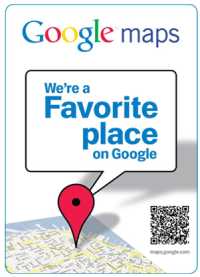 John Hanke, VP of Google Earth, Maps, and Local. PlaceRank is like PageRank for places It tries to figure out how prominent a place is based on factors such as ‘references on the Web, reviews, photos,’ says Hanke, ‘how many people know about it, how long its been around.'”

PlaceRank isn’t new – but I believe this is the first acknowledgment of its use with Google Maps in a local search context. Bill Slawski reported it back in 2007 in this post, which is well worth reading (like the rest of his site). Here is a link to the patent that describes Place Rank (two words) and Interestingness.

Undoubtedly, Local Search SEOs will be excited by a new unit of measure (will we get another green pixel bar? – I think not). I think this is a good move, but are Americans and the West in general ready to use QR Codes?

How to SEO for PlaceRank

The patent offers some clues about the ranking algorithm.

Here is my summation of the ranking detail in the patent:

So, there are numerous factors in this algorithm that might seem too complicated for an individual SEO to influence, which basically suggests that gaming PlaceRank will be very difficult. 🙂

Yellow NZ is back with a bang

Feel free to share...FacebookTwitterRedditStumbleUponLinkedinemailEarlier today, Yellow (Pages) New Zealand tweeted: Have you checked out the new http://www.yellow.co.nz website? More relevant search results, a fancy new design & improved page load speed! I confess to not keeping up with the Yellow Pages scene since leaving Sensis some 18 months ago. I had mentioned Yellow NZ a […]

Search terminology – some customers call a spade a bloody shovel

Feel free to share...FacebookTwitterRedditStumbleUponLinkedinemailIn my work as an in-house SEO consultant I sometimes see the client using industry terminology on the website rather than the words you or I might type into a search engine. Case in point — should it be mortgage or home loan? I live in Australia and during casual conversations I […]