System Mechanic 7 Professional (SM7Pro) is a suite of security, maintenance and diagnostic programs by Iolo. It works with Microsoft Windows 98, ME, 2000, XP and Vista. I tested it on Windows XP. 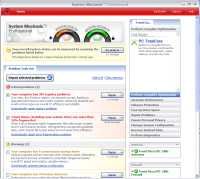 I did not install the AntiVirus and Firewall, because removing and restoring my existing software takes a long time and I am not in a position to test these features in a controlled environment.

I let it loose on a 30 GB partition and it estimated initially it would take about 90 minutes to find deleted files. This estimate kept increasing and it looked like it might run all night. Unlike other file recovery programs, it appears to undelete seemingly impossible things, such as individuals email, calendar tasks, notes and so on.

At the 30 percent mark, it had found 25,000 deleted files plus 92,000 others that were filtered out. The latter includes temporary file fragments that you won’t want to worry about. The process ended sometime while I was in bed and it found almost 29,000 files, with a prognosis of “Fair”, “Unknown” or “Good”. Only about 30 files were marked “Good”. I think I had deleted them about three months ago. I restored a file that was 238 MB in size and it opened as expected. I defragment my drives regularly, which may explain why so few recoverable files were found.

This wipes an entire drive or just the free space on a drive. I let the latter loose on my 23 GB download drive that is never backed up. It took about seven hours. I have no way of knowing how well the drive was scrubbed. If you have truly incriminating evidence on your drives, I suggest doing what the Feds do – pulverise the disk platters into tiny fragments.

This is the core functionality that you are buying and it is very reassuring because it spouts these large numbers of things it fixes – broken shortcuts, invalid uninstallers, registry problems, recovered memory, dangerous and unnecessary startup problems, Internet clutter fixed, and so on. Honestly, I could not tell if my PC was working faster or if I was better protected, but it certainly felt reassuring to be free of all these negative bits and bytes.

A feature called SafetyNet enables you to undo SM actions, in case you deleted something in error.

The only feature I was able to compare one day after the initial cleanup (I used the PC quite a bit) was detection of spyware. SM7 found only two (I couldn’t tell which ones they were) while Spybot Search & Destroy (a free program) found nearly 100 instances in 13 categories. After Spybot had removed them all, a re-scan with SM7 still saw two spyware parasites. I let it remove these unidentifiable nasties and had sound sleep.

Feel free to share...FacebookTwitterRedditStumbleUponLinkedinemailI made a shocking discovery today. I was going to uninstall Adobe Web Suite Premium CS3 from my hard drive to move to another PC when I got this message upon clicking the Deactivate option: I knew there was a problem with CS3 when I had installed Windows 7. Over the years […]